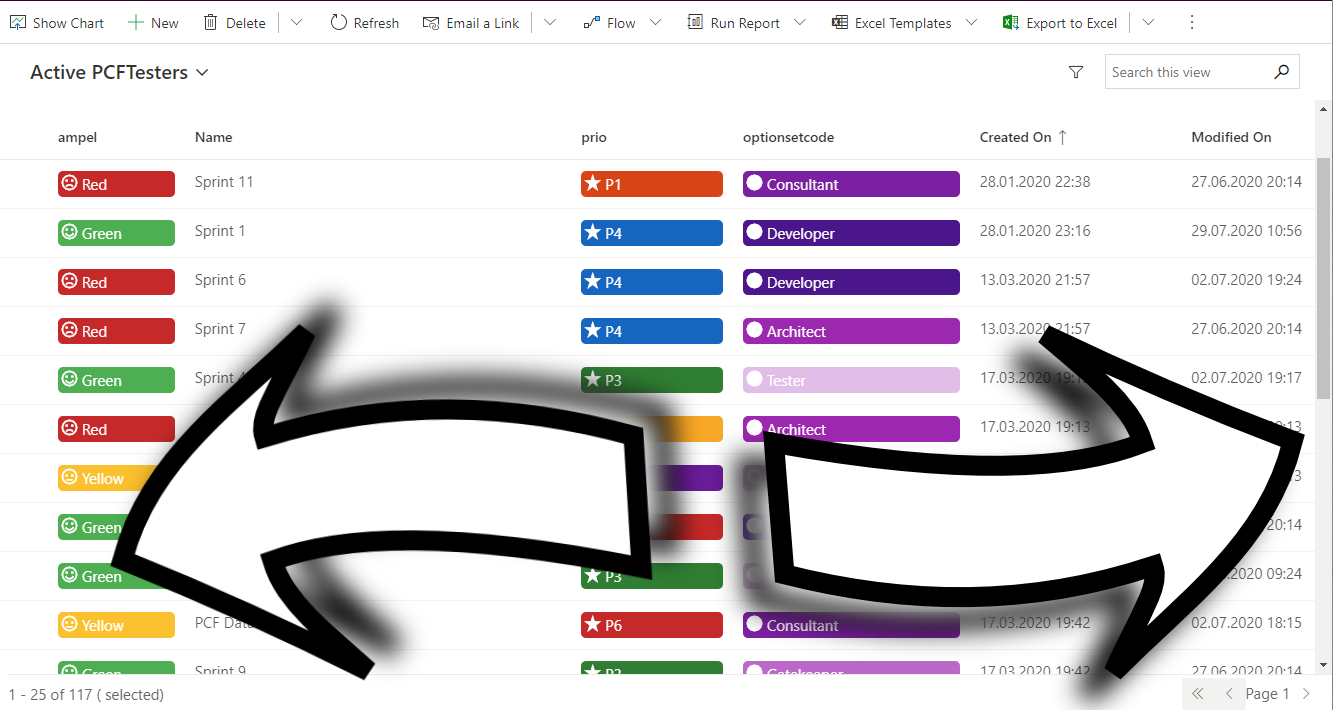 This is a part of my blog “My Checklist for a Dataset PCF using FluentUI“. The footer has to show the navigation buttons and the selected/available records. In this blog post I’ll talk about how I’ve implemented the paging and how I’ve integrated it in my footer.

For the footer, I’ve made a React functional component, taking 2 props:

The render part is easy; the most of the time took me to make the UI kind of looking like the Dynamics 365 Grid Footer. That’s what I’ve ended up with:

I know if I’m on the first/last page by inspecting the dataset.paging properties: hasPreviousPage and hasNextPage.

The logic for paging is all inside the usePaging custom Hook. For that I’ve took a few state variables, like: pageSize, totalRecords, currentPage, firstItemNumber, lastItemNumber:

There are two possibilities to work with pages, provided by the PCF Dataset sdk: loadNextPage/loadPreviousPage and loadExactPage. Scott Durow wrote a great blog about dataset paging, telling about the sdk methods and showing the differences between CanvasApps and ModelDriven Apps.The loadNextPage/loadPreviousPage didn’t felt wright for me because:

So I’ve used the loadExactPage method. This way I get only one page of data, for both ModelDriven and Canvas Apps. This method is not documented in the sdk, but is referenced in the forum, so I hope this will be supported in the future.

Unfortunately there is no measure in the dataset, telling which one is the currentPage. So we need to detect and keep track of it. I do that using a side effect. My effect watches the dataset changes (the second parameter of the useEffect). When the dataset is changed, my state has to be recalculated:

Given the currentPage and the pageSize, it’s no problem to calculate the rest. But where to start? I’ve used the dataset.paging.hasPreviousPage, as an indicator telling me if I’m on the first page or not.

Now I just need the methods to move to the next, previous or first page. I had to cast (using “as any”), since the “loadExactPage” is not defined in the TypeScript definition.

Now I can integrate it in my GridFooter component. The missing part is the “selectedCount” prop, which I’ll explain in my next blog.

At least at the time I’ve developed the PCF, there were a bug in the dataset behavior: when I’ve navigated to page 2 (or more), and then used the search input, the dataset.paging.totalRecordsCount was right (like 1 if there was only one record found), but dataset.sortedRecordsIds and dataset.records had 25 records (the paging size). Fortunately, the firts one(s) was the filtered ones, so I could implement a workarround: I always consider only the first records in my dataset and ignore the rest: